The Man Who Literally Wrote the Book on DIY Pot Farming
Open a larger version of the following image in a popup:

The Man Who Literally Wrote the Book on DIY Pot Farming

As legalization (and commercialization) gain momentum in the US, an emissary from the halcyon days of marijuana culture breaks out his photo albums.

While the future CEOs of Marijuana, Inc. will probably dress like district attorneys, in the old days enterprising herbalists donned worn denim and holey cotton like the back-to-the-land-ers they kind of were. Mel Frank literally wrote the book on DIY pot farming—it’s called The Marijuana Grower’s Guide, 1974—and in his photography he treated his subject (weed) with similar care. There’s more than a little nostalgia packed into “When We Were Criminals,” then, an exhibition at M+B Photo in Los Angeles showcasing pictures by Frank ranging from the 1970s to the 90s. Growers and pickers pose with their crops, big seven- and nine-pointed leaves placed just so to obscure their faces. The woman in Harvesting, Dutchess County, NY, 1982 can’t quite be identified; another, with gray hair, appears arms akimbo in a photo called Freedom is the Issue T-shirt, Sierra Nevada Foothills, CA, 1979. Against green leaf and blue sky, Frank plays in the gray area of representation, showing just enough to show off, without giving anything away. They were criminals, after all. 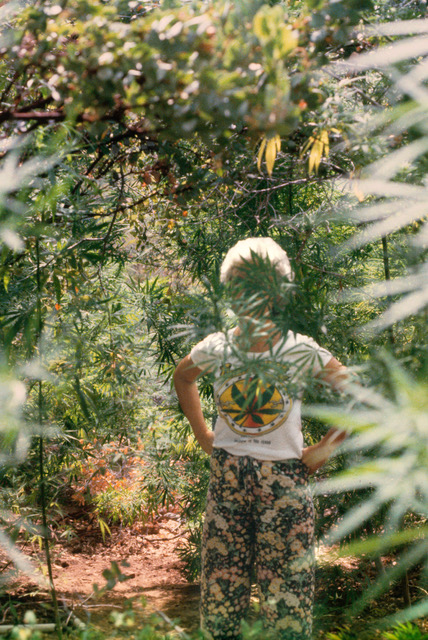 What can a photo of a raw drug tell you about whatever indescribable inner state it might catalyze? Over the years, pot has inspired a quixotic visual genre all its own, but there’s also a chemical sympathy between photography and psychotropic drugs that few other media share. Frank’s film registers the stuff of High Times centerfolds: In Seeded Colombian Landrace, Backyard, Oakland, CA, 1979, a terpene-frosted plant sprays across a deeply saturated red ground, and a dry bud of Purple Mexican, Oakland, CA, 1979, hunches in front of a textured indigo. Then there are the images made with a microscope, which picture Frank’s product at psychedelic levels of magnification. Orbs of resin shine on the Tip of Sinsemilla Flower, Photomicrograph X40, 1977, while Capitate-Stalked Resin Glands, Thai Stick, Photomicrograph X100, 1979, resembles watery flares from a turquoise sun.

The show is a bittersweet dose from a grainier era—when weed was becoming a serious business, but was still a serious crime. From the emerald foliage of the cheekily named Hands Up, Checking Maturity, NY, 1982, to Trichome Technologies’ HPS Garden, Oakland, CA, 1998, a picture of a lamp-controlled crop, Frank hints at the growing industrialization of his field. Now we’re approaching the downside we’ve been warned about: Once a unified national policy on marijuana is reached in the US, the usual suspects—Philip Morris, Monsanto, individuals already in positions of power—will be poised to corner the market. (Sure enough, former Republican speaker of the house John Boehner, once an advocate for cigarette companies, is already a lobbyist for a cannabis firm called Acreage Holdings.) Frank’s Sharing a Joint, San Francisco, CA, 1983, shows a quainter baton being passed; a figure seated in a chair accepts a spliff from a companion seated on the floor; their faces are hidden, their hands and their joint meet in the center of the frame. Our prisons, bursting after decades of federal policy with drug offenders who are disproportionately people of color, are testament enough to the baby boomers’ delusion that things were better back then. But, Frank seems to say, things sure looked different…now? There is no outside, folks. There is barely even an outdoors. 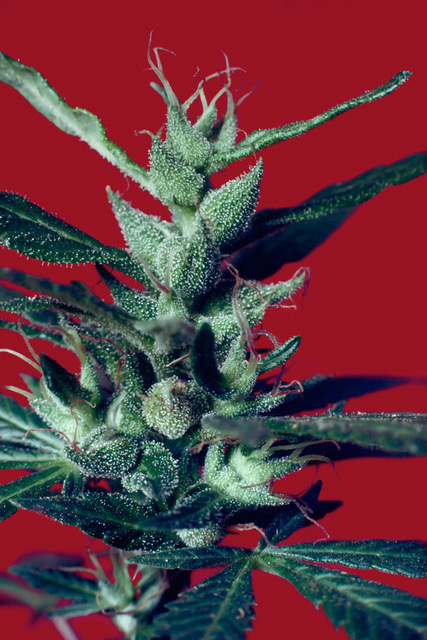